Due for publication in late summer 2020 – Bookmark this page for updates and tasters about the exciting climax of this story. 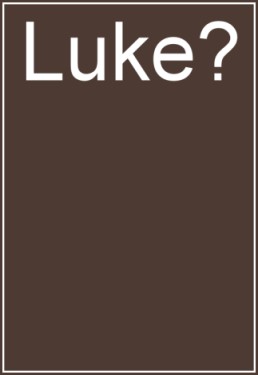 Introducing, in order of appearance, the characters in the third book of The Whitby Trilogy – provisionally titled “Luke”

Pearl (the title of book No 2 of the trilogy) was born in 1976 to an upper-middle-class family. She was an only child. Her mother was killed in a car accident when she was sixteen. Her father was a senior military officer. She was educated at a private school and then an Oxford University college, graduating in English. She joined a national newspaper and was quickly promoted to sub-editor.

Pearl’s father developed a fatal genetic disorder. She abandoned her career to nurse him. After he died, Pearl became a library assistant and befriended an old man named Eugene (the title of book No 1 of the trilogy). She listened to his life story and prepared his family tree. Later, she went to Myanmar to locate his wartime girlfriend. Standing at Eugene’s graveside, Pearl was handed a note intended to undermine her respect for the old man.

Pearl can’t rest until the true story of Eugene’s life unfolds. Helped by a Myanmar student she digs up the past until becoming enmeshed in a cold case police review. She clashes with Marcus a wealthy stock market day trader and starts a relationship with a woman. The murder mystery is solved but not before a young man falls under suspicion.  By the start of book No 3, Pearl has given birth to a boy.

Marcus is introduced in the first chapter of book No 2 “Pearl”. Born in 1981, he is the grandson of a policeman, Basil Clarke who, on his deathbed, obligates Marcus to prove that “Eugene” (book No 1) murdered two of his brothers back in 1956. The case, which Clarke worked on as a young police officer, was unsolved.

As a child, Marcus was a loner, introvert and a consummate swot being brilliant at numbers. He took a Masters degree and set up as a home-based stock market day trader. His break came in 2008. By anticipating the market crash, he cleaned up and bought his first Maserati.

His enquiries lead to the Derbyshire Police HQ where he meets Alice, a senior detective. They work together, fall in love and are married in May 2016. The cold case review of events in 1956 is a resounding success; both Marcus and Pearl (see character No 1) make a major contribution.

Towards the end of book No 2, Pearl (who has a female partner) tells Marcus that she would like a child and adds “will you do that for me?”

Naing was born in 1977 to Aung and Hlaing in Madaya a town in Myanmar some 39 kms North of Mandalay. She is the granddaughter of Chit and Eugene. She was a bright child, extrovert and graduated from the School of Dentistry in Mandalay. She loved to travel and moved to a dental practice on the South Coast of England.

Her mother, Hlaing died when Naing was ten years old. She spent much of her formative years with her grandmother Chit but was not aware she had an English grandfather until Pearl (a complete stranger at the time) broke the news.

Naing and Pearl became lovers. Because they want a child, Pearl becomes pregnant by Marcus (see character No 2).

Pearl and Naing are in a lesbian relationship but want a child. They agree on Pearl as the mother and an approach to Marcus to be the father. He agrees and a baby boy is born in April 2017.

Naing chooses the name because it’s derivation is “noise”  as demonstrated from his earliest days. Tristan has jet black hair and facial features similar to his father who is a frequent visitor, usually on a Saturday afternoon. A strong bond forms between father and son.

Alice was born in Essex to a working-class family and was educated at a state school before going to University. She had a brief affair with a fellow student. Joining the local police force as a graduate she rose in the ranks before moving to the Derbyshire force as a detective inspector. She headed a cold case enquiry requested by a civilian named Marcus (see character no 2). They fell in love and married. The enquiry was a success and she was promoted to the Metropolitan Police Force in charge of white-collar crime. She lives with her husband in Tufnell Park, North London.

Luke was a grandson of Molly one of the thirteen children of the Whitby clan. As a young boy he ran errands for his great uncle Harold who became his benefactor. He helped Harold put his valuable stamp collection on-line. While promoting computer studies to the new intake at Nottingham University he met Kyaw, a Burmese student who he later married. He assisted a police cold case review into the disappearance in 1956 of two of the Whitby brothers. He never accepted that Harold was responsible for a crime.

Kyaw was studying English at Yadanabon University in Mandalay, Myanmar when seconded to help Pearl research the family of Chit the sweetheart of Eugene in 1946-1949 post-war Burma. She came to the UK as part of her studies and met Luke who she subsequently married. She helped Pearl and Naing uncover evidence as part of a cold-case review of missing persons back in 1956. She remained a close friend of Pearl.